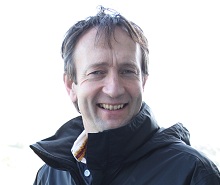 R.C Sherriff's WWI-set play Journey's End is to become a feature film from the producers behind the acclaimed Private Peaceful.

The play, which was first performed in the West End in 1928 starring a young Laurence Olivier, is set over four days in an officers' dugout in Aisne during the final months of WWI.

It seemed there was a stalemate over the film rights, with Hollywood studio giant Warner Bros sitting on them for decades without actually making the film. Â

Historian and author Anthony Seldon suggested that Guy de Beaujeu (pictured) and Simon Reade of Fluidity Films try to obtain the rights to the feature, but Warner Bros seemed set to retain them.

Until, that is, Prince Andrew intervened with a letter to Warner Bros UK head Josh Berger about the fact that the play is of huge significance to Britain as the most important ever written about WWI. The studio acquiesced.

It turned out, however, that the UK and Eire film rights had actually lapsed in 2008, effectively rendering the rights back to Sherriff's estate. Warner is still interested in the rest-of-the-world distribution rights though, depending on casting.

Talking of casting, contrary to recent press reports suggesting Benedict Cumberbatch and Eddie Redmayne are being lined up to star, we decided to talk to the charming de Beaujeu, and can now confirm Â that no definite casting decisions have been made; it is still very early days on this one with plenty still to be ironed out.

As and when the film is produced by Fluidity Films, it will be produced by de Beaujeu and Reade, with Seldon acting as executive producer and historical adviser. David Grindley is slated to direct - he has worked on the play for over twenty years, having directed it in the West End and on Broadway.

An interesting route to the big screen thoughâ€¦

More details on Journey's End will be on Production Intelligence over the coming months; to order a subscription to our interactive database of advance and archive productions, click here.