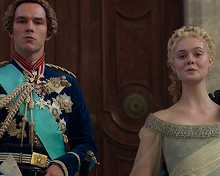 The satirical period drama is loosely based on the rise to power of Catherine The Great, and is produced by MRC, Thruline Entertainment, Echo Lake Entertainment, Lewellen Pictures and Macgowan Films.

Created by Tony McNamara, based on his stage play, the series has been filmed in the UK since the pilot was produced in late 2018. The drama uses 3 Mill Studios as its base with extensive location work at various historic English locations, including Hatfield House, Belvoir Castle and Hever Castle.

Fanning, Hoult and McNamara are among the extensive roster of executive producers.

For the last few months, Production Intelligence (PI) subscribers have had access to the details of several key production hires on The Great S3, including the producer, production supervisor, production co-ordinator, production designer and supervising location manager.

For more details on what Production Intelligence can offer, click here and head to this page to book a free demo of the site

The Great image via Hulu.