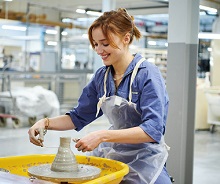 The Colour Room is a Sky Original and is based on the rise to fame of the Art Deco artist from Stoke-on-Trent.


Co-produced by Sky, Caspian Films and Creative England, the film will be directed by Claire McCarthy and is written by Claire Peate, winner of BAFTA Rocliffe in 2016. The supporting cast includes David Morrissey Darci Shaw, Kerry Fox and Luke Norris.

The Colour Room will start production later this month in Stoke-on-Trent and Birmingham. The film is produced by Thembisa Cochrane and Georgie Paget for Caspian Films, in association with Denaire Motion Picture Poetry and co-producer Neil Jones. Executive producers are Laura Grange for Sky, Paul Ashton for West Midlands Production Fund (Creative England) and David Gilbery, Charlie Dorfman, Marlon Vogelgesang for Media Finance Capital in association with On Sight.

Dynevor said: "I am so excited to be joining the cast of The Colour Room, especially in the role as one of the nation’s most celebrated artists, Clarice Cliff. It's truly such an honour to take on such a remarkable character. The script is a beautifully written contemporary take on the 20th century, and I feel proud to be working with such a strong female team, both in front and behind the camera. I look forward to telling Clarice’s story and of course working with Matthew too.”

Writer Peate added, “The story was inspired by a single image; a young factory worker leaving her grim, industrial reality behind her and stepping into the rainbow of the Colour Room – a world of joy and possibility. It was thanks to the script winning at BAFTA Rocliffe and being performed on stage that it was picked up, and I’m thrilled to now be working with Phoebe and Matthew in bringing The Colour Room to life.”

Image: Dynevor and Goode preparing for their roles in The Colour Room at Wedgwood; via Sky