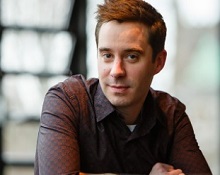 BBC One has ordered a new fictional crime drama from James Graham and House Productions about two shocking murders that took place in an already fractured community.

Sherwood is set in the Nottinghamshire mining village where Graham grew up. When two shocking murders take place, suspicion is rife and the killings threaten to re-ignite old divisions sparked during the Miners' Strike of three decades earlier.

The 6 x 60 drama reunites Graham and House Productions; their previous collaboration was The Uncivil War for Channel 4.

Graham (pictured) said of Sherwood: "It means the world to have this opportunity to bring the voices of a community I grew up in to BBC One. So much is spoken about the divisions and difficulties in these 'Red Wall' towns, but they're not always understood. I feel so honoured to be able to tell a fictionalised story about a very real trauma, but with the humour and heart and resilience of the people I know and love there."

Juliette Howell and Tessa Ross, executive producers for House Productions, say: “James has written an extraordinarily powerful drama, which has immense heart, wit and humanity - and, as ever with his writing, it’s a pertinent piece for our times.”

House Productions has a busy year ahead with filming due to get underway on Life After Life for BBC One and The Seven Deaths of Evelyn Hardcastle for Netflix.