Step up to 1st AD in film 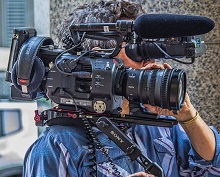 ScreenSkills is hosting a new training course for experienced 2nd ADs looking to step up to the role of 1st AD.

Organised by Mission Accomplished, the course would normally cost participants £200, but thanks to funding from the ScreenSkills Future Film Skills fund, it is currently being offered for free.

The Step-up to 1st AD in Film training course is aimed at those already working in film as 2nd ADs (with at least three significant credits) who want to work as a 1st AD, those with 1st AD experience in high-end TV drama who wish to transition into feature film, or those who have recently become 1st ADs and are looking to consolidate their knowledge and experience.

The course will enable up to 16 participants to gain the necessary skills and knowledge to step-up to 1st Assistant Directors. It will take place on Zoom from 9.30-16.30 over four consecutive Saturdays on 23rd and 30th January and 6th and 13th February.

The course will be led by experienced assistant director  Neil Wallace, who has worked as a 1st AD on high profile series and films such as King Fury 2, Charlie's Angels, Hellboy,  Johnny English Strikes Again, The Night Manager, Victoria, High Rise and A Royal Night Out. In addition to his 1st AD work Neil also regularly delivers training for a number of organisations including  the NFTS and The Production Guild of Great Britain.

The course tutor is Paul Sarony, is a well-established  executive producer/producer whose credits include The Lovebirds, Show Dog, Vampire Academy – Blood Sisters, Lessons in Love, The Man Who Would Be Bond, Mrs. Brown, Welcome to Sarajevo; Bhaji on the Beach; Hideous Kinky, and The Englishman Who Went Up A Hill and Came Down A Mountain. He also guest tutors short courses and master classes at the National TV & Film School, the Production Guild and is one of the Skillset 100 registered tutors.