Emmerdale phases a return to filming 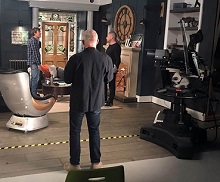 ITV soap Emmerdale has begun a tentative return to filming by recording six new episodes featuring characters during the lockdown.

Production started yesterday (20th May) at the programme’s Leeds studio with a pared-down crew working within social distancing guidelines. The six episodes will be recorded over a two-week period.

The new filming protocols include: social distancing, filming units staying together to work in designated studios with crew using their own sanitised equipment, office staff continuing to work from home to ensure fewer people on the ground, no location filming, scripts featuring a smaller number of actors and fewer scenes to avoid camera moves.

The crew have also attended a meeting with the company’s medical adviser and participated in a health and safety induction.

The six new episodes will mean the soap can stay on air in June and reflect the real-life backdrop of the lockdown.

“Lockdown has created an opportunity for us to focus on what is important in our lives. When we first discussed commissioning these episodes back in March the writers instantly rose to the challenge.  Seven weeks into lockdown and the scripts have an added poignancy and meaning.”