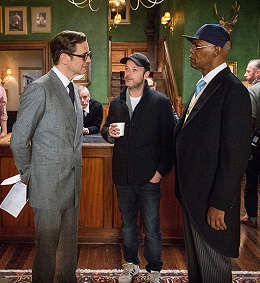 Officially untitled at the time of writing, the film is a prequel reportedly set in the early 20th century and explores the origins of the Kingsman spy agency featured in Vaughn’s previous two films.

A starry cast is reportedly on board including Daniel Brühl, Charles Dance and Rhys Ifans.

Production Intelligence subscribers can log in for more on the key heads of department and the studio base; non-subscribers can click here to request a free online demo.

Vaughn (pictured on the set of the first Kingsman) is also due to begin work on another instalment in the action franchise, which would follow on chronologically from Kingsman: The Golden Circle, released in 2017.

The director recently finished work on Rocketman, due for release in May, which features Kingsman star Taron Egerton as legendary singer/songwriter Elton John. Production took place at the famous Bray Studios, best known for its association with the iconic Hammer Film Productions.

Production gets underway today, 11 October, on Midas Man, a biopic of iconic music manager Brian Epstein, known as ‘the fifth Beatle’. The 12-week shoot takes place in Liverpool, London and the US.

Back due to popular demand – The Knowledge book!

This year we have had more requests than ever for print copies of The Knowledge book so we really can say it is back due to popular demand!