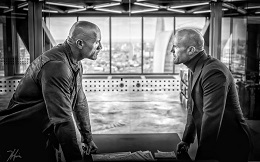 Fast & Furious spinoff Hobbs and Shaw, starring Dwayne Johnson and Jason Statham, will film on location at a former coal power station in Yorkshire this month.

Location filming will take place at Eggborough Power Station, 25 miles east of Leeds, according to local outlet the Northern Echo.

The industrial site dates back to the mid-1960s and was closed as an operational plant only a few weeks ago.

Yorkshire filming for the movie will be crewed from London.

Pinewood Studios is the film’s main production base but there has also been high-profile location filming for the movie in central Glasgow involving high-speed road chases.