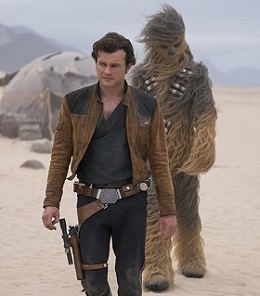 Lucasfilm’s Solo: A Star Wars Story is the second standalone adventure in the relaunched Star Wars franchise and used Pinewood Studios as its base of operations.

The movie tells the story of the young Han Solo, how he formed a close friendship with wookiee Chewbacca and came to own iconic spacecraft the Millennium Falcon.

Huge sets were built at Pinewood, including repurposed interiors and exteriors of iconic Star Wars spacecraft the Millennium Falcon.

The interior set was mounted on gimbals to achieve motion effects in-camera and the production team ended up with an outside shell of the spacecraft that weighed in at 31 tonnes.

“We could never have afforded, nor had the space, to build a set that had so much technical depth within it,” says Neil Lamont, the movie’s production designer. “Once we had found Fawley and it gave us the concrete structures, the broken-down piping, the general dirty and rusty feel we wanted, the location very much became a foundation to how we imagined the rest of Corellia.”

Recent Star Wars movies have made a habit of using existing interior locations for key story settings. Previous standalone story Rogue One used the sleek modern visuals of London’s Canary Wharf underground station as a stand-in for a hostile Imperial base.

Fuerteventura in the Canary Islands became the key non-studio location for Solo, standing in for a desert planet setting reclaimed by sweeping deserts and sand dunes.

Sets were built as prefabricated structures back at Pinewood and then shipped to Fuerteventura where they were put together as a 360-degree filming environment.

“It was stunning to see the set materialise out of this landscape,” says Alastair Bullock, the film’s supervising art director.

“It’s a beautiful landscape, with this dune running directly down on quite a slope to this dramatic and windswept rocky coastline," Bullock said. "It’s one of those sets that, when you’re in the middle of it, it’s a complete environment – a 360-degree set."

The Canary Islands are long-established as a popular filming location, with varied visuals backed up by generous filming incentive support of up to 40% for productions that spend at least €1m locally.

Location filming for Solo: A Star Wars Story also encompassed a brief visit to the Dolomites, a mountainous region of north-west Italy that stood in for another visually-arresting alien planet. The production team was based in the Italian town of Misurina and hired helicopters, Sherpas and four-by-four vehicles to transport the unit to filming locations at an altitude of 2,400 metres.

JJ Abrams will direct the next instalment in the Star Wars franchise, currently known only as Episode IX, which is scheduled to go into production at Pinewood Studios later this year and will close the current trilogy following the events of The Last Jedi.

A new trilogy is being planned with a separate cast of characters that will involve Rian Johnson, writer and director of The Last Jedi, in a key creative capacity.