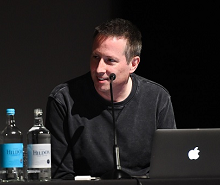 Filming has wrapped on The Kid Who Would Be King, a fantasy adventure film from director Joe Cornish, Big Talk, Working Title and Fox Searchlight.

Cornish (pictured) directs from his own screenplay with Louis Ashbourne Serkis in the lead as Alex, a modern-day schoolboy who discovers the mythical sword Excalibur.

The Kid Who Would Be King is one of several projects wrapping in the UK around now. The third series of Humans is finishing off a five-month shoot at Elstree Studios, while the four-part comedy Wannabe for BBC Three has also just lensed.

In Manchester, ITV's three-part drama Butterfly, starring and exec produced by Anna Friel, is due to wrap in early March.

Details on the key hires attached to these titles can be found on Production Intelligence, the subscriber database with listings for more than 9,000 film and TV projects at various stages of production.