Tom Hardy to film Dickens for BBC One 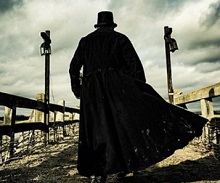 The  creative team behind Taboo is set to reunite in a small-screen adaptation of A Christmas Carol for BBC One.

Seasoned TV scribe Steven Knight is working with Scott Free London and Tom Hardy's production company, Hardy, Son and Baker, on the 3 x 60 which is planned for transmission at Christmas 2019.

A Christmas Carol is the first in a planned canon of Dickens adaptation from the team. It will be executive produced by Knight, Ridley Scott, Kate Crowe, Piers Wenger for the BBC, Dean Baker and Hardy.

Crowe, head of TV at Scott Free London, said of the news: “A Christmas Carol explores miserliness, isolation and selfishness against generosity, charity and open-heartedness; a clash of ideologies that is as significant today as it ever has been.”

Hardy added: “A Christmas Carol is a fabulous magical piece of theatre and an embarrassment of riches for our creative team - from character all the way through to design. Here’s to having a lot of intricate and wonderful fun. We feel very lucky.”

Production Intelligence subscribers should log in and follow A Christmas Carol as we will update with more news over the coming months. Non-subscribers can click here to request a free online demo.