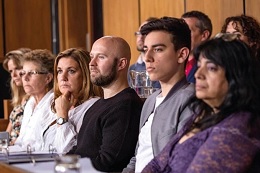 As an apparently average murder case in a typical British town enters its final day, the defendant looks drained, the jurors tired but attentive, the barristers alert and pugnacious.

The courtroom is an unfussy, relatively modern set-up, while the judge’s chambers, jury rooms and robing rooms are distinguished only by the modesty of their decor and the functionality of their furniture.

Everything else about the set-up, however, is extraordinary.

Dragonfly TV’s The Trial was born when director Nick Holt, who won a Bafta for Windfall Films’ and Channel 4’s The Murder Trial, considered how to dig deeper into the British criminal justice system.

Frustrated at the prospect of another long process of consent and lack of access to consultations between client and counsel, and the jury’s deliberations, he began to consider other ways to film these out-of-bounds areas.

The idea of taking a scripted murder case to trial was to impose as much reality as possible on proceedings. While key witnesses and the defendant would be played by actors, all other participants would be real people performing their professional roles in front of a jury of 12 randomly-chosen local residents.

This was complex and unwieldy enough to require two directors, so Holt recruited Kath Mattock to work alongside him. Mattock brought expertise in drama, having won a Bafta for co-creating and executive producing BBC2’s Murder, in which killings were picked apart through a series of monologues to camera.

“I’d sat in the Old Bailey for a lot of my research for Murder,” Mattock explains. “I wanted to explore what documentary could do that drama couldn’t.

“With pure drama, you know everything about it before you start shooting. In a documentary, you observe and engage with everyone, piggybacking events over which you don’t have much control. This was an attempt to bring those two things together to serve one big story.”

Mattock and Holt approached Sarah Quintrell, whose first script for TV was C4’s Broadcast Award-winning single drama Ellen, and leading QCs David Etherington and Max Hardy to assist them in crafting a case that was legally robust, with an underpinning narrative that was both dramatically interesting and relatable. 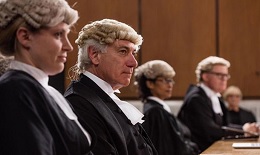 The result: university lecturer Simon Davis is accused of murdering Carla, his estranged wife. Cast as the defendant was Michael Gould – whose vast stage experience gave him the necessary confidence to improvise, while his relatively low television profile would enable the jurors to suspend their disbelief.

The same went for the courtroom. After 20 years of use, Newbury Crown Court had been recently decommissioned.
The very ordinariness of the building, sat next to a working police station, was appealing, says Holt.

“Not every courtroom looks like the Old Bailey. There’s something low-key and matter-of-fact about a lot of murder cases, and we wanted that reflected in the court in which we shot. Newbury is not a murder capital.”

The next step was to recruit legal professionals, whose involvement would be central to the credibility of the project. In Brian Barker, Max Hill and John Ryder, Dragonfly found three figures of unimpeachable reputation.

Barker, who before his retirement in 2015 spent his final two years as senior judge at the Old Bailey, would preside. Hill, the government’s independent reviewer of terrorist legislation, would be senior prosecuting barrister and Ryder, a counsel in cases including the murder of Damilola Taylor, would lead the defence.

The professionalism and integrity of the production team, combined with the opportunity to peek into a jury room, proved irresistible for all of them.

And what of those jurors? Letterboxed from within Newbury’s catchment area, they were assembled to reflect the demographics of the area and then randomly selected on the day. They ranged from an office manager and a barber to a teacher and a retired nurse.

Each was reimbursed in the usual way for time off work and brought their life experiences to bear on the murder of Carla Davis.

And then the cameras rolled: 42 of them, the majority fixed to allow reality to unfold in a relatively unmediated fashion. Nine feeds (and 45 audio feeds) were recorded at any given time for around eight hours a day over 10 days. 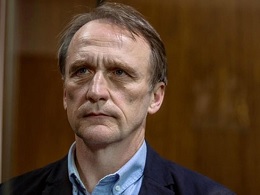 There were no cuts or second takes and the QCs were left to run their cases as they wished, creating a few uncomfortable moments for the cast when unexpected questions were asked or avenues pursued.

Executive producer Jonathan Smith describes this unique situation: “Kath and Nick have had to master an extraordinary amount of detail, while I compare the work the actors did to revising for an exam.

“On the day of the murder, you have 12 people with their own lives, which means 12 different scripts of what happened on that day. The police investigated from their point of view, the barristers from theirs and the characters from theirs. Trying to stop that all falling apart has been the knife edge we’ve had to live on.”

The final, crucial element was filmed a month later: the truth. These jurors will find out whether they had made the right decision, and part of the final episode is given over to a dramatised segment depicting what really happened to Carla.

The decision to film after the trial was a practical one imposed by time constraints, but also served a useful narrative purpose.

“Things came up in the trial that we thought needed to be answered, elements that were raised in witness testimonies,” says Quintrell. “But it didn’t change the story, which was delivered before the trial; nor did we manipulate characters to do anything new.”

After such a nightmarish logistical undertaking, Mattock has no regrets about the work put in.
“Some elements of the case we prepared played big, others didn’t; some resonated with the jury, others didn’t. But it boiled down to people judging their peers, which is what makes this so fascinating.”

This article was first published by Broadcastnow.co.uk.