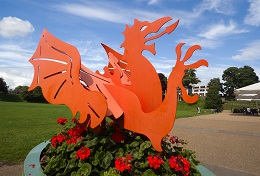 Executives at Cardiff-based production company Bad Wolf are planning to introduce a stronger studio-based filming culture to the UK.

They are currently working on an eight-part adaptation of Philip Pullman’s parallel-universe trilogy His Dark Materials, as well as TV versions of Deborah Harkness’ A Discovery of Witches and Arthurian drama Warlord, based on novels by Bernard Cornwell.

Bad Wolf will be launching a new studio in Wales to accommodate the productions – the premises have yet to be formally revealed – and Tranter and Gardner want to follow the Americans’ example by making more TV in a studio environment.

“What we recognised with our editorial cornerstones like A Discovery of Witches, His Dark Materials and Warlord was that they were all pieces that if you could choose anywhere in the world to shoot them we would have chosen Wales,” said Tranter, in an interview with WalesOnline.

“When I was filming in New York – when I was doing the series The Night Of – I learned to love filming in a studio. And that is quite different from how you are traditionally taught to produce in the UK, where it is very location-based.

“That partially comes out of the editorial social realism to the kind of storytelling that the UK has traditionally always done very well. But it also comes out of monetary necessity.

“People always think it is more expensive to shoot in a studio than it is on location. And it comes out of the shorter runs that the UK has traditionally done. But as the UK moves to a longer run model it makes more financial sense for you to shoot in a studio.

“We are committing an editorial strategy to be intertwined with a physical production strategy of shooting a lot more in a studio than most independents do.

“It is also intertwined with our commitment to Wales and wanting to have an added string to our bow as a production company by helping the whole socio-economic perspective, the social outreach and the training, as well as inspiring in education and apprenticeships.”

Wales is growing its international production appeal. Cardiff now has a Pinewood studio facility and the country has hosted high-profile shoots including the US dramas Da Vinci’s Demons and TNT’s Shakespeare series Will.

The BBC recently announced it would be increasing its production spending in Wales by 50% with an additional £8.5m each year as part of its commitment to the UK’s regions.