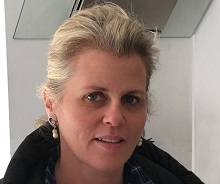 This year sees the return of The Media Production Show, held at London Olympia on 13 and 14 June.

There will be a varied schedule across the two days, with creative talent, content creators and technical experts contributing to a far-reaching range of topics covered in seminars and panel discussions.

Production designer Sonja Klaus will be appearing at the event on Day Two as part of the Production Designers Showcase, where she will talk about her work on Taboo, the period drama starring Tom Hardy which has been commissioned for a second series.

Klaus has worked on a plethora of high-profile projects during her career, with TV dramas including Mr Selfridge and Merlin, and recently-completed films The Aftermath with Keira Knightley and In Darkness with Natalie Dormer among her credits.

We wanted to get an insight into Klaus’ work and a flavour of what will be discussed at the show.

Production designers generally come on board major projects pretty early, and Taboo was no exception. Klaus explained how and when she became involved and the collaboration involved during the build-up to filming.

“Several years before Taboo went into pre-production, I was asked by Ridley Scott to join on the set of a film he was shooting at the time - Exodus: Gods and Kings.

“He mentioned that he had the perfect job for me to design and would I read the script. I did and I was hooked immediately - two and a half years later I started pre-production. It was a very, very long wait but worth it!”

“Tim Bricknell (the producer) and I exchanged emails over several months before any directors or any other crew were involved, looking at suitable areas in the UK to film Taboo. We eventually decided we would go for London.

“He and I - with input from Ridley - really talked about the look and the feel of the show. When Mark Patten (the lighting designer) joined I had many chats with him and he totally got on board with the whole project. I was so delighted with his work.

“The VSFX team from BlueBolt was also terrific and I worked with them a lot to get the whole piece to come together.”

“The project was a mammoth undertaking; there is never enough money! [Creating] London 1815 - what can I say! Trying to find uninterrupted streets that were long enough to do a tracking shot or simply to have someone walking was a challenge and, of course, lots of boats.

“We needed to tell a story of a busy London port with a shoestring budget.”

“Designing and building the docks was perhaps the most satisfying part – people continually ask me which docks we used, so I guess I did my job right because they obviously think it was all there and we just turned up with the cameras.”

Klaus began her career in theatre and says that particular route to film and TV is a useful one, particularly when it comes to working within limited budgets.

“My time in the theatre was definitely time well spent and I do use some tricks of the trade still in my work. It makes you have a greater understanding of the words ‘We have no money’.”


And the best advice Klaus has been given during her career?

“When I was set decorating a very experienced decorator said to me, ‘Never put anything on the set that you don’t love…’

“I still keep that in the back of my mind and make it a rule.”

Thanks to Sonja Klaus for her help in compiling this article. She will be appearing on 14 June at the Production Designers Showcase in the Production Theatre at 11.30am as part of the Media Production Show, Olympia, 13-14 June. Don’t miss Klaus and other key industry speakers by registering for your free badge here.