Northern Ireland a hit with film and TV producers

Since 2010, Northern Ireland’s film commission NI Screen has invested more than £14m ensuring that US cable network HBO shoots its fantasy adventure series Game of Thrones in the province. In return, it reckons the show has contributed an estimate £115m to the Northern Ireland economy.

This sounds like a good trade, and it is, but it’s not the only upside to this six-year-old partnership. So successful has the NI/HBO marriage been that other TV producers have been persuaded to shoot projects there.

NI Screen’s end of year report for 2015 underlines just how far Northern Ireland has come since Game of Thrones first pitched up in 2010. Last year alone, cameras rolled on The Frankenstein Chronicles, The Truth Commissioner (pictured below), Line of Duty, Morgan, Millie Inbetween (series 2), Lost City of Z, The Journey, We’re Doomed! The Dad’s Army Story, The Secret, The Fall and Game of Thrones (series 6).

NI Screen is optimistic, saying: “Production of film and television drama here continued to boost the local economy and provide employment for hundreds of people.”

In addition to film and TV drama, Northern Ireland has also started to see work from other TV genres roll in. Zoe Ball and Ashley Banjo were in town to present BBC1 primetime gameshow Can’t Touch This, for example, while the animation sector continues to flourish.

The film commission also upped its game in terms of support for local companies involved in digital and interactive content – launching an initiative in partnership with Microsoft.

“When we launched our four-year strategy in 2014 (called Opening Doors), we aimed for a direct spend of £250m in the local economy based on an investment of £42.8m,” says Williams, “I am delighted that we are well on our way to achieving this with an estimated £119m Northern Ireland spend to date on an investment of £14.1m by NI Screen.”

Not everyone can expect to get the kind of VIP treatment afforded to HBO and Game of Thrones but there is a decent amount of funding available for other projects via the NI Screen Fund. This comes in the form of a recoupable loan and is intended to assist in completing budgets on productions that are almost fully financed. NI Screen will not, for example, consider a project with less than 65% of its funding in place.

Available to feature film, television and digital content, the Fund can invest a maximum of £800,000, up to a ceiling of 25% of the overall project budget. In terms of the kind of projects it wants to back, NI Screen says it is “looking for productions that contribute to building a sustainable screen industry in Northern Ireland and that can show a direct economic benefit to the region. Projects must be commercially viable and able to demonstrate clear possibilities for commercial exploitation.”

In the case of films, NI Screen says the attachment of an experienced sales agent will be an asset, as will domestic or USA distribution. For TV, an expression of interest from an international distributor or broadcaster is preferable. Not to be overlooked, it adds, is that “Northern Ireland is part of the UK and, therefore, the UK film and television tax breaks apply”.

The second is the quality of the crew and equipment base, which has been established over a number of decades. Long before the big international projects moved in, the local production industry had built up its expertise and experience working for the BBC, Channel 4 and UTV in Northern Ireland and Irish public broadcaster RTE.

More than just a location hotspot

On the equipment front, leading camera equipment supplier 24-7 (recent credits include The Fall, The Frankenstein Chronicles (pictured) and The Secret) has just expanded its Northern Ireland hub and moved to a new 2,250sq. ft facility in Ormeau Business Park, Belfast. They have also re-stocked with the latest state-of-the-art cameras, including the Arri Amira, Alexa XT Plus, Red Epic Dragon and Sony FS7.

Third is the diversity of locations in what NI Screen calls “the most compact 5,196sq m of backlot in the world – offering myriad stunning locations from beautiful coastlines to idyllic villages, mountains, glens and lochs, through to urban landscapes and bustling cities with a mix of architectural styles, from Victorian red-brick to 21st century glass and steel.”

And last but not least is Northern Ireland’s investment in state-of-the-art studio space, which has made it more than just a location hotspot. The best-known site is Titanic Studios, which has been hosting Game of Thrones since 2010. Also important is The Linen Mill, which offers 77,000sq ft of internal build-space/stage, approximately 30 minutes outside of Belfast.

Northern Ireland’s versatility has been evident in the wide range of productions shot there recently. ITV’s Gothic thriller The Frankenstein Chronicles, starring Sean Bean, was set in London in 1832, but the series actually used locations in Belfast, County Antrim, County Armagh and County Down. These included Antrim’s Castle Galgorm, which hosted the production for two weeks; and Upper Crescent in South Belfast.

By contrast, Line of Duty and The Fall are both contemporary crime dramas. The first shifted production from Birmingham to Northern Ireland after series one, using locations such as Ormeau Avenue, Belfast as the setting for a police station.

The Fall, which has sold to around 200 countries around the world, started shooting its third series at the beginning of January and has used numerous locations around Belfast including the airport, Botanic Gardens and Customs House Square (the show’s star Gillian Anderson was spotted at the latter location in February). Also used for series three were the council offices at Newtownabbey – around 10 miles outside Belfast. 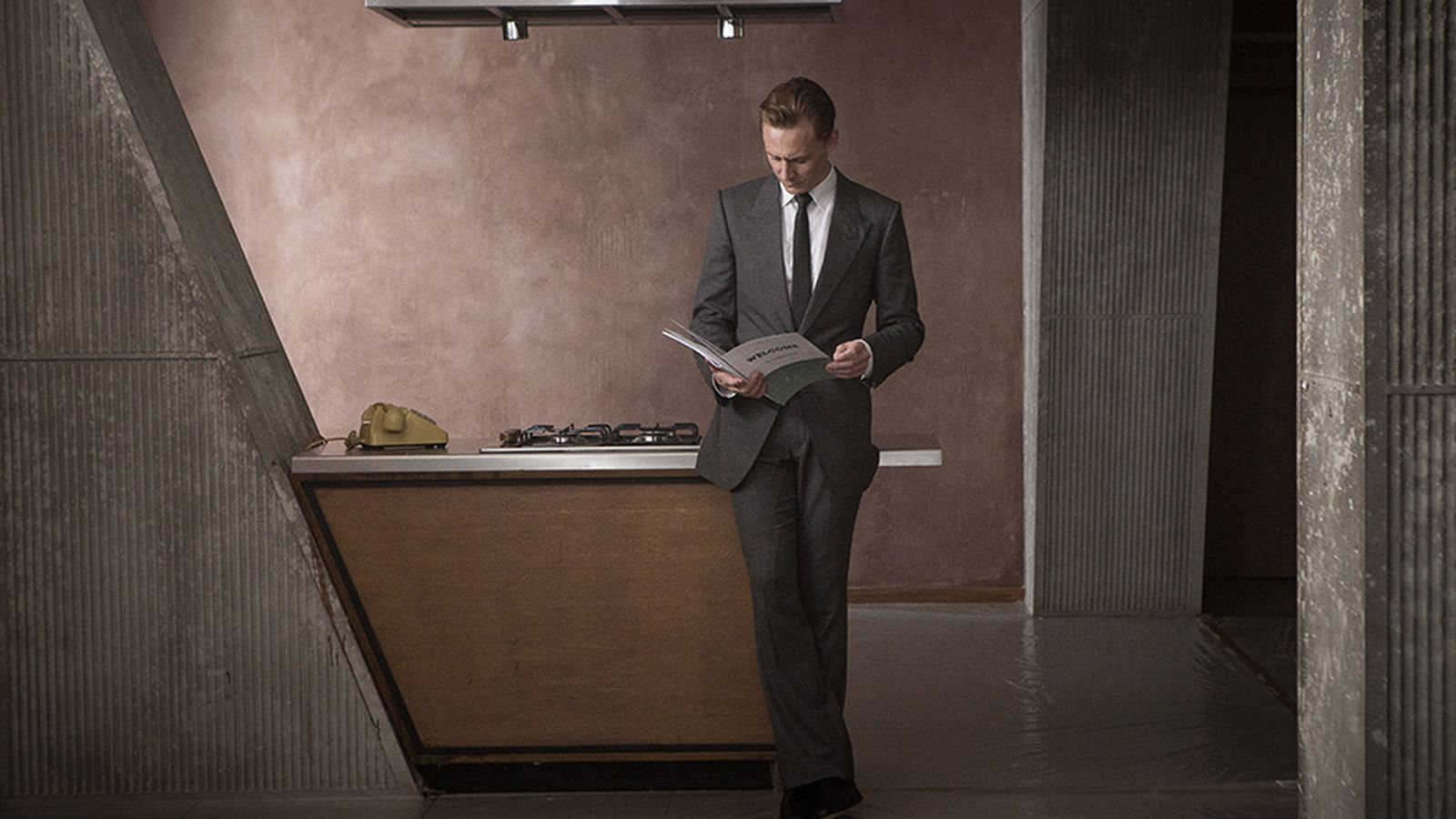 Northern Ireland on the big screen

In terms of films shot in Northern Ireland, The Truth Commissioner has recently been released in cinemas while Miss Julie, starring Jessica Chastain, Colin Farrell and Samantha Morton, was filmed on location at Castle Coole, Co. Fermanagh.

A particular coup was production company Plan B’s decision to shoot large sections of Lost City of Z in Northern Ireland during a five-week shoot (before heading off to Colombia). The film received funding through NI Screen.

Richard Williams commented: “With films including the Oscar-winning 12 Years a Slave and critically acclaimed titles Selma, World War Z and The Departed, Plan B’s reputation precedes it. This is another vote of confidence in our local film industry and further cements Northern Ireland’s reputation as a world-class production location.”

Another topical example is High-Rise (pictured above), starring Tom Hiddleston, Jeremy Irons and Sienna Miller. Due to launch in the UK on 18 March, it centres on a new residential tower built in the mid-1970s. The film was shot in late 2014 and made heavy use of the seaside town Bangor in County Down (14 miles outside Belfast). Key locations included an old leisure centre, a Co-op building and Bangor Castle’s walled garden.

NI Screen backed the film, with Richard Williams explaining: “Our investment in projects of this nature help develop the Northern Ireland production sector; contributing to the long-term stability of our creative industries, through the creation of jobs and the evidence Northern Ireland can compete in the global market.”

Aside from The Fall, other productions that have started filming in the last few months include ITV drama The Secret, starring James Nesbitt, and BBC1 drama My Mother and Other Strangers, written by Barry Devlin (Ballykissangel).

Set in Northern Ireland during World War Two, the latter series follows the fortunes of the Coyne family and their neighbours as they struggle to maintain a normal life after a huge United States Army Air Force airfield with 4,000 service men and women lands in the middle of their rural parish in 1943.

The future certainly looks rosy for Northern Ireland’s film and TV business. And there’s no question that top actors seem to enjoy working here. But if there is one challenge facing the region it is finding enough studio capacity to host more than one major production. The Belfast Telegraph recently reported that Northern Ireland missed out on a major film production called Book of the Dead “due to a lack of production facilities”.

The good news, however, is that this is now being addressed. In 2014, for example, Titanic Studios was given planning approval for two new film studios providing an additional 100,000 sq ft of facilities.

Coming into 2016, plans were also unveiled for another new £10m complex called North Foreshore Film Studios, to be built by Belfast Harbour.

According to a design statement included as part of the latter’s planning process, the success of Northern Ireland as a film and TV production destination means “there is significant demand to enhance the amount of studio space available in Belfast. Belfast Harbour and Belfast City Council want to support this successful industry and the wider economy as a whole.”

When it is complete, the new complex will feature a 66,000sq ft film studio and sound stage, along with a 23,000sq ft workshop and 32,000sq ft production space. Combined with the expansion of Titanic Studios, this could help establish Belfast as one of the major production venues in Northern Europe.