Game of Thrones" locations shine through

Congratulations to Game of Thrones' Robert Boake for winning the Outstanding Achievement by a Location Professional for a TV Programme at the inaugural LMGA Awards, which we recently attended in LA.
Â 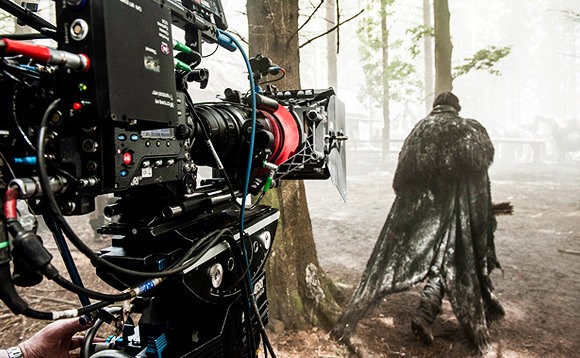 Â (On location in NI; copyright Making of Game of Thrones)

Taking into account all the stunning locations featured in the series, several of which are in Northern Ireland, it's clear why Boake took home the award, beating off stiff competition from location professionals working on the likes of Breaking Bad, House of Cards and Behind the Candelabra.

Discussing his time in LA, Boake talked to us about the series, and was clearly delighted, not only because it has done so well but because of the effect it has had on Northern Ireland: "I like what it's done for the country and the pride it's instilled," he says.

Boake has noticed that Game of Thrones has helped increase production activity in Northern Ireland, drawing more and more filmmakers to choose the region, including Universal's upcoming Dracula - the result of one of the many requests for scouting middle earth productions the area currently receives.

He also feels Game of Thrones has helped Northern Ireland improve the skills of filmmakers, as crews move up the ranks on the show and develop their craft.

Though the fantasy drama is filmed in many countries, Northern Ireland has been an important location, with its gothic castles, swaying grasslands, scenic rivers and golden beaches. "It was lovely to win at the LMGA Awards and even cooler for Game of Thrones to scoop two awards on the evening," he added (the series also picked up Outstanding Location TV Programme).

The show has also had another positive effect on Northern Ireland - specialist Game of Thrones tours: "Sometimes I see them when I'm out scouting!"

All of this heralds exciting times for the country, including a possible expansion for Titanic Studios and several other shows such as The Fall flocking to film there (series 2 is currently in production).

Keep your eyes on Production Intelligence for any updates on future series of Game of Thrones.