A gritty trailer for 24: Live Another Day starring Kiefer Sutherland has been released and by the look of things, the series isn't going to hold back in portraying a carnage-hit London.
Â 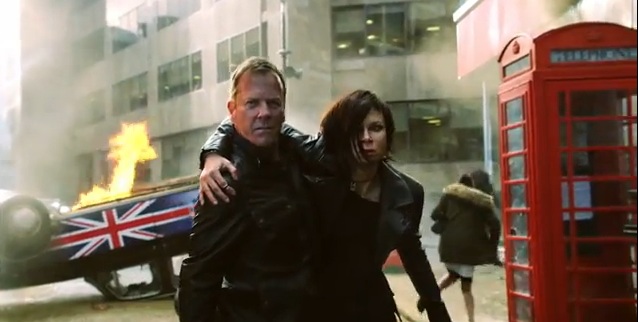 The 49-second teaser opens with an overturned taxi with a union flag on the side, and as bullets start flying into the cab, the camera turns 180 degrees to reveal flames, people running and screaming, and gushes of smoke coming from office blocks - including the Gherkin building. If you haven't realised yet that this is London under siege, producers throw in a double decker bus and a red phone box for crystal clarity.

Sutherland's Jack Bauer makes an entrance amidst the mayhem holding his ally Chloe O'Brian (played by Mary Lynn Rajskub). Bruised, battered and firing shots, he doesn't look happy to be in our capital city...

In other news, it's been announced that national treasure Stephen Fry is to play the British Prime Minister in the TV drama. As well as Fry, fellow Brit Colin Salmon is alsoÂ announced as part ofÂ the cast. They will be joining Sutherland inÂ the 12-episode drama which is set to make its debut in the US and the UK (on Sky1) in May.

24: Live Another Day is still in production - you can keep track of its developments on Production Intelligence, our online database of advance and archive productions.

Have you ever needed to film in London on the move? If so did you know you might need police presence? Click here for more details.
Â