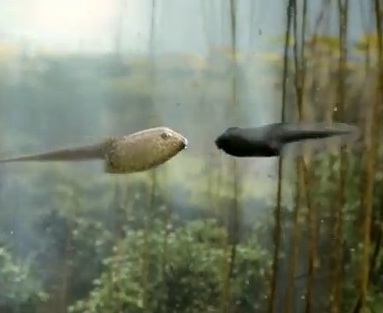 here's been a lack of CGI in adverts of late, so it's refreshing to see Leo Burnett's latest campaign for Freeview featuring a group of dancing tadpoles.

The advert begins with two tadpoles meeting underwater who then start to chase each other. More tadpoles join in and a dance-off pursues - all to the song You Really Got Me by The Kinks. As the tadpoles rise to the surface, a boy is revealed, watching them with a big Freeview balloon above his head and a voiceover saying: "Entertainment. It's even better when it's free."

Stink was the production company behind the advert, with Glassworks handling post.Â  London's Leo Burnett is no stranger to Freeview - it was also behind their balloon advert in 2011, part of an Â£18m campaign.

Freeview's Guy North said: "With this campaign we want people to engage with the brand, by showing just how amazing free entertainment can be. We hope this will make them think again about Freeview and realise that far from being second best, being free can mean something is even better."

What's your favourite ad on TV at the moment? Let us know by commenting below or by visiting our Facebook page.
Â