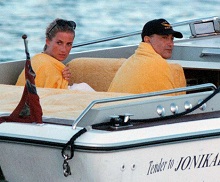 Wonderhood Studios is in production on a feature documentary for Paramount+ and Channel 5 about the life of Dodi Al-Fayed.

Dodi: Last Days of a Playboy (1x90’) reveals the other side of the ‘pampered playboy’ image – that of a lonely, isolated boy who had to deal with his parents’ divorce at a young age, and who went on to feel as if he had failed to live up to his father’s expectations.

The doc covers Al-Fayed’s life up until the events of 31 August 1997 when he and Princess Diana died in a car crash in Paris.

With unprecedented access to his former girlfriends Denice D. Lewis and Annie Cardone, close friends including Peter Riva and business partners, the film charts Al-Fayed’s life from his early days as a child caught up in his parents’ separation, through a stint at Sandhurst at the behest of his father, and a career in Hollywood - to his final weeks in France.

The film reveals how Dodi’s determination to forge his own path brought him into conflict with Mohamed Al-Fayed. His father struggled to let him have his independence, preferring to keep him close to help achieve his own ambitions.

Tom Anstiss, executive producer, Wonderhood Studios, said: “The story of Diana’s death is one of the most well-told stories in history, but half of that story is missing.  Our film reclaims the life and legacy of Dodi. It’s a nuanced and tragic tale which explores how a kaleidoscope of seminal moments in social history brought together a Princess, a Patriarch and a Playboy.”

Luke Korzun Martin, director, added: “This film has extraordinary access to a fascinating range of people who knew Dodi intimately across his life. Their untold and deeply personal testimony delivers a dramatic and compelling new narrative about an enigmatic figure who was part of one of the most significant events in modern times.”

Dodi: Last Days of a Playboy is filmed, produced and directed by Luke Korzun Martin, produced by Cecilia Valensise, and executive produced by Tom Anstiss and Samantha Anstiss.

The BBC has greenlit a new drama, Mayflies, to film in Glasgow and Ayrshire this autumn with Martin Compston, Ashley Jensen and Tony Curran.

Katherine Parkinson and Youssef Kerkour are set to star in Significant Other, a new 6 x 30 comedy drama from Nicola Shindler’s Quay Street Productions for ITVX that starts filming in Manchester next month.