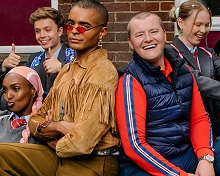 From Tiger Aspect Productions, and Jack Whitehall’s Jackpot Productions, the series is directed by Freddy Syborn and executive produced by Whitehall.

The new series also includes a one-off Christmas special, also directed by Syborn, which sees Whitehall return as Alfie Wickers. Layton Williams and Charlie Wernham return as Stephen and Mitchell, this time as drama and PE teachers returning to their old school where they were previously pupils.

Syborn said: "It’s been such a joy to work with Charlie and Layton again, as well as our room of new writers. Jack and I really hope that everyone will fall in love with our brilliant Class K 2.0, and we’re excited for a whole new generation to discover the show for the first time."

Bad Education 4 will be delivered as 6 x 30 eps plus the 1 x 45 minute Christmas special. It is co-written and exe produced by Syborn and Whitehall.