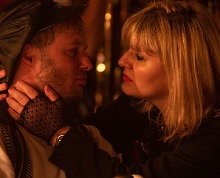 This suggests the corporation is on track with its Creative Diversity Commitment - to spend £112m of its existing commissioning budget over three years (2021/22-2023/4).

The £44m was invested in a total of 67 TV programmes across all genres to increase diversity and inclusion, both on and off air.

The programmes were made by 48 different independent production companies, with 73% of those companies having diverse leadership and 10% had never been commissioned by the BBC before this year. In addition, £4m has been invested in supporting 90 diverse radio commissions.

Some of the content broadcast across the year includes: Tonight With Target; Then Barbara Met Alan (pictured); Glow Up: Britain’s Next Make-Up Star; This Girl's Changed; Young, Welsh and... Bossin' It and Krept and Konan: We Are England; Dreaming Whilst Black and Salt.

All programmes that qualified for the financial investment met at least two of the following three criteria:

The financial investment is supported by a new expectation that for all new commissions since April 2021, production companies should recruit 20% of their production teams from under-represented groups.

June Sarpong, BBC director of creative diversity, said: “The BBC is for everyone and audiences from all backgrounds rightly expect to see themselves represented in our programmes. That’s why we are leading the way by making the biggest financial investment to on-air inclusion in the industry.

“I’m delighted by the progress we’ve made in the first year which is an important milestone and provides a solid foundation for us to go even further to ensure the BBC truly reflects the public we serve.”