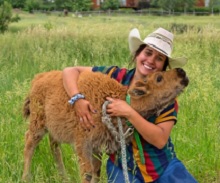 The 4 x 60 series explores the prairie lives of the Doan family’s 17,000-acre Black Leg Ranch in North Dakota as the real-life cowboys, who have farmed the land traditionally for generations, strive to make a living in the modern world.

Sam Grace, creative director of Boom and executive producer, said: “The Doans are an extraordinary family and we just can’t wait to get started at their cattle ranch for a fascinating insight into the ups and downs of their all-American life in the Midwest. With Skin A&E also returning for a fourth series, we’re delighted to be working on multiple projects for Channel 5, which continues to be very supportive of us as a nations-based producer.”

Boom, part of ITV Studios, has also been recommissioned to produce a fourth series of Skin A&E, centring on a specialist skin clinic.

Boom Group is one of Wales’ largest production companies, responsible for over 400 hours of programming annually for Channel 5, Channel 4, S4C, UKTV, BBC and ITV. Its slate includes the recent double Bafta-award winning Big Zuu’s Big Eats for Dave, as well as the forthcoming travelogue for More 4 which will see Alan Carr head off in search of the places that inspired one of the world’s best loved literary figures, Agatha Christie.