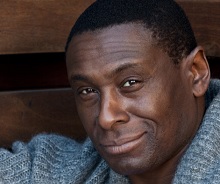 From the late 1980s to the mid-1990s, Benn and Eubank captured the imagination of the public, with their constant feuding and rivalry resulting in two famous bouts that defined British boxing for a decade.

For Whom the Bell Tolls is produced by Leo Pearlman and Heather Greenwood and penned by seasoned sportswriter Daniel Harris with Belinda Joanne Ampah and Kieron Hawkes. David Harewood will direct, marking his feature directorial debut.

Pearlman said: “We all remember exactly where we were and how we felt when Nigel Benn and Chris Eubank fought their two epic battles, our aim is to bring back those memories and feelings, to remind people just why they remain two of the most compelling characters in British sports history.


"In Daniel Harris, we have one of the most original and exciting sports writers in the UK, someone with a visceral and highly visual style."

Harewood remarked: “I’m delighted to be at the helm of this fantastic project. It’s an exceptional script and I was drawn to it immediately as it covers many of the themes I have explored in my documentaries and so fundamentally in my book - that of Black British male identities and the unique struggle to find a sense of balance and belonging.

"As a result, it feels like the perfect time for me to direct this, my first feature film. As a boxing fan and someone who watched both titanic fights live, uncovering the personal and private stories behind those epic battles has been revelatory and I cannot wait to bring their stories to the screen.”

Harris added: “I grew up in the era of the middleweights, so getting to tell this story is a ridiculous privilege. It’s just the most amazingly rich, cinematic tale, full of compelling, unique characters and driven by eternal themes like rivalry, tragedy, humanity, and identity – pretty much all you could need to make something really special.”