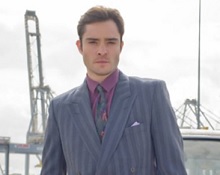 As first reported on Deadline, the film centres on two British officers (Westwick and Willis) who are on a mission in Bavaria towards the end of the war to rescue an American (Graves) who is being held by the Nazis.

Williams said: “Signature have worked with Blue Fox for years, acquiring titles from them to distribute in the UK & Ireland as well as internationally, and to expand our working relationship with James, Lisa and Michael in this way is a real pleasure.

“We are all thrilled that Ed Westwick, Matt Willis and Rupert Graves have come on board this very exciting project and look forward to its great success worldwide.”

Blue Fox’s James Huntsman added: “The appetite for audiences around the world to relive World War II adventures never seems to fade. We are thrilled to partner with Signature Entertainment on this incredible action-packed adventure based on a true story.”

Director Alderson posted a photo of the crew call timesheet on Twitter, saying he would be shooting the film for the next month.