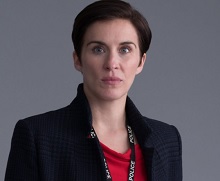 
Reckless and out of control, Lana is ex-military and pushed to breaking point dealing with a series of improvised explosive devices which threaten the capital during a terrorist summer campaign.

The Line of Duty actor said at the time of the commissioning news: “So grateful to be working with Jed again. I’m really looking forward to creating a strong, bright and troubled character in Lana Washington. Daniel Brierley has produced a brilliant and nail-biting script. I can’t wait to get started later this year.”

Mercurio remarked: "Everyone at HTM Television is honoured Vicky McClure will star in Trigger Point, Daniel Brierley's breathless thriller that will have viewers on the edge of their seats. We're immensely grateful to Polly Hill and ITV for giving this opportunity to a brand-new writer."

Brierley is a screenwriter with several short films to his credit including My Face Is In Space, Checkpoint and Graceland. He is part of the TV bursary scheme, funded by the industry body, ScreenSkills, with UK based production company, Dancing Ledge, with the aim of encouraging top screenwriters to mentor an up-and-coming writer of their choice.


Mercurio chose to mentor Brierley, with Trigger Point a direct result of the ScreenSkills scheme to develop new writing talent.