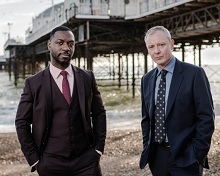 The line-up of top industry names will be discussing a range of topics via the virtual events platform Hopin. Attendees will have the opportunity to network with their industry peers through the Events Chat functionality and can also request one-to-one meetings.

Here we bring you a preview of three sessions that focus on the scripted sector, with big-name speakers lined up.

On Day One (18 May), a session called Scripted Commissioners take places at 10.45. Heather Fallon of Broadcast Intelligence will be in the chair alongside two of the UK’s most notable TV drama commissioners, Polly Hill, head of drama, ITV and Caroline Hollick, head of drama, Channel 4.

Hill’s recent commissions include No Return, a drama starring Sheridan Smith that is set to film later this year; Riches, from writer Abby Ajayi and The Tower, an adaptation of Kate London’s novel Post Mortem, which has just started filming and a second series of Brighton-set detective drama Grace with John Simm.

Recently-ordered projects under Hollick’s remit include Help, Jack Thorne’s drama set in a care home that filmed in Liverpool earlier this year with Jodie Comer and Stephen Graham, and The Birth of Daniel F Harris, a new 8 x 30 drama from Pete Jackson and the makers of The End of the F***ing World, due to film in the summer.

Day Two (19 May) will see Screen International’s editor, Matt Mueller, shooting a session called Powerhouse Producers – Scripted. Three of the UK’s most acclaimed producers - Iain Canning, joint managing director, See-Saw Films; Alison Owen, partner, Monumental Pictures and Tim Bevan, co-chairman, Working Title Films – will come together to discuss a range of topics. Subjects in the spotlight include the impacts of the pandemic and Brexit on production; sourcing and developing film and television projects that will connect with audiences; and forging relationships with the new global players.

Also on 19 May, two of the UK’s most notable directors, Penny Woolcock and Douglas MacKinnon comprise the panel at a Directors Masterclass session hosted by writer/director Victoria Thomas. Topics to be debated include: the impact of the last year; how the role of the director has changed; the new implications of filming in a COVID world, and how has this affected availability of work and forward-planning, as there is set to be a 'boom time' as production really gets going again.