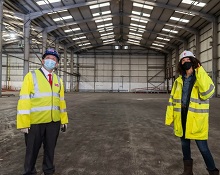 Following the recent news that Hackman Capital Partners (HCP) has invested in building Eastbrook Studios, the global real estate and operating company has now confirmed it is funding a second filming facility in London, also in the borough of Barking and Dagenham.

The two studio sites – with 18 sound stages in total - are expected to bring up to a combined £350m into the area, and the potential for over 1,800 new jobs. HCP also plans to invest heavily in training and educational programmes in the local area.

Last year, HCP and Square Mile Capital announced plans to build Eastbrook Studios – the capital’s largest film and TV production centre – in Dagenham.  The new, second deal, will see the signing of a 10 year-lease with Barking and Dagenham Council for two existing warehouses alongside the River Roding in Barking, which will be converted into studios, to be known as The Wharf.

The Wharf’s ten-acre site will complement the larger Dagenham Eastbrook Studios complex, providing six new sound stages with associated production offices and workshop space. The studios are expected to open before the main Eastbrook complex (CGI impression below) and could be available for filming in autumn this year.

Adrian Wootton, chief executive of Film London and the British Film Commission, commented: “There could never be a better time to open new studio space in the capital. Despite COVID, London and the UK’s film and TV industry is flourishing. Industry recovery in the final quarter of 2020 generated £1.19 billion spend for film and high-end TV, the second highest three-month spend on record. The demand is there – and growing.

“We just need the studio space to match it, which is why today’s announcement of additional sound stages in east London by autumn is not only welcome, but extremely timely. Film and high-end TV can help drive London and the UK’s economic recovery, providing UK plc with billions of pounds, supporting hundreds and thousands of jobs and bringing regeneration and growth to areas like Barking and Dagenham.”

Cllr Darren Rodwell, Leader of Barking and Dagenham Council, said: “This is fantastic news and is another sign of the huge confidence in our borough, London and the UK from HCP, who have already made a massive commitment to building Eastbrook Studios and are now expanding to The Wharf. “Their decision to invest in The Wharf is another boost for our borough and London, meaning more jobs and opportunities for local people. We will not only be able to say movies will be Made in Dagenham but in Barking too!”


Minister for investment, Gerry Grimstone, added: “Brilliant news for Barking and Dagenham and with a further commitment from US investor Hackman Capital Partners towards boosting the local economy, driving regeneration and showcasing the UK’s world-class film industry to the world. The Government is paving the way for an investment-led recovery through our Office for Investment, freeports and measures to ensure the UK is the best place to invest and grow a business.”

Picture L-R: Cllr Rodwell with Lisa Dee, Head of Film LBBD inside one of the warehouses at The Wharf