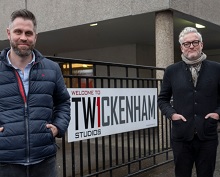 Twickenham is one of London's older film studios, and the scheme aims to upgrade significantly the current offering, to include a new state-of-the-art TV studio including audience participation, sound production studios, a second sound-mixing suite to host tentpole productions. There will also be a new entrance building creating new public spaces.

A planning application has been submitted to Richmond Council and building is expected to begin later this year with completion before October 2022.

“The redevelopment is such an important turning point for our iconic studio, the significant investment in the regeneration and expansion of the site and its facilities will enhance our whole studio campus. We are investing heavily into securing the best industry talent as well as the latest technologies that combined will ensure the next chapter for Twickenham Studios is even more successful than the last.”


Managing partners Piers Read and Jeremy Rainbird’s firm The Creative District Improvement Co. are the development managers, working in conjunction with General Projects and British Airways Pension Fund who are backing the investment.

The pair, pictured, who acquired Twickenham Studios in February 2020, added: "This is the evolution of Twickenham Film Studios into a truly world-class tech and innovation campus in London building on over a century of film history. From script to screen, the expansion means we can welcome even more productions, film makers of all levels, who will call the new campus “home".


"The physical enhancement of the campus not only talks to the heritage of the buildings but will see a continuation of our investment into cutting-edge facilities and best in class production workflows centred around sound, picture, and film studios. We can’t wait to welcome even more producers to Twickenham as the content revolution goes from strength to strength.”

The Creative District Improvement Company (TCDI CO.) is aiming to develop brand new studios around the UK as part of a £500m investment expected to create 5,000 jobs and a million square feet of production space by 2024. The company is the development manager and lead anchor at Littlewoods Film Studios in Liverpool where a £30million investment by British Airways and Capital & Centric is being ploughed into regenerating the Littlewoods Building into a world class film and television complex.