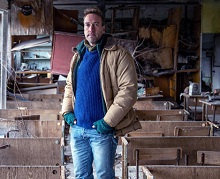 Channel 5 has commissioned a one-off, feature-length documentary that follows presenter Ben Fogle as he spends a week living inside the Chernobyl Exclusion Zone, thirty-five years after the world’s worst nuclear accident.


Ben Fogle: Inside Chernobyl is produced by Remarkable Television. The team was given special access deep inside the exclusion zone and the deserted towns and forest, including the Chernobyl Nuclear Power Plant itself. Anyone entering the newly-opened control room is limited to just five minutes for radiation safety reasons.

Fogle will also explore the ruins of Hospital 126 and talks to a policeman who was on duty the night of the explosion.

The doc will examine the unique abandoned tenements, now makeshift living spaces, and will see Fogle meet the Self Settlers who came back to live in Chernobyl after the evacuation. He will also chart the limited return of some wildlife to the zone.

Fogle said: “With the news of Ukraine seeking to designate Chernobyl as a UNESCO World Heritage Site, I’m proud to share this incredible journey with viewers as we delve into the past of Chernobyl, uncover its secrets and bring awareness to its historic significance, while making an amazing discovery of wildlife returning, from horses to wolves and bears.”

CS-15 Safety Solutions ltd, providing healthcare, safety and remote location support solutions for TV and film. Our team are experts in their field. From unit… more Call: 07707 807069   |   Add to Shortlist