As the eighteenth series of Strictly Come Dancing gets underway at Elstree Studios, we take a look at some of the new safety precautions, now so vital to all productions, implemented by BBC Studioworks. 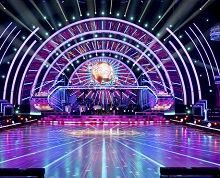 BBC Studioworks provides full studio and post services to Strictly and its weekday companion show, It Takes Two. Both programmes are filmed at Elstree. Below are some of the fundamental changes the Studioworks team has been working on to ensure as safe a shoot as possible.

Additional air handling units have been hired to fill the stage with 60,000m3 per hour of fresh air;  the fresh air system within the gallery suite has also been upgraded to ensure sufficient air changes.

To allow for social distancing, each gallery is limited to a specific number of people at any one time. Bespoke Perspex screens are in place across all the gallery suites and a number of gallery-based operatives and production staff have been relocated to cabins outside.

On the studio floor, some of the operated cameras have been replaced by remote heads and all other cameras are spaced more than two metres apart.

Perspex vocal booths have been created for the band’s singers, each with a bespoke air extraction system. Each booth has also been rigged with a monitor with a live feed of the show’s musical director, Dave Arch.

Handling of mics and communication tools

Microphones will not be shared across the series-run. Each microphone is clearly named for its specific user and sanitised after each use by BBC Studioworks’ sound team. To avoid issues around proximity, the talent are responsible for micing themselves, with BBC Studioworks crew, in PPE, advising and guiding throughout the process.

To limit their exposure due to the propelling of vapour, the singer’s hand microphones remain in place within their booths throughout the series. They are also sanitised there.

Talkbacks, walky-talkies and headsets are also assigned to individuals and sanitised after every use, with headsets being bagged and named.

In addition to Covid-secure cleaning protocols, electrostatic misting is sprayed overnight after each day on set, including communal areas and toilets.

In case a member of the production team needs to self-isolate, BBC Studioworks provides full talkback facilities to the studio from their home via a Riedel control panel and audio-visual of the studio floor via a Zoom feed.

Adaptations have also been made to the way BBC Studioworks facilitates the two shows’ post production requirements. For past series, both Strictly and It Takes Two have made use of BBC Studioworks’ Avid Symphony suites at its Elstree edit village.

However, this year editors and producers on Strictly are working remotely at home, with access to Avids and the Logging system via a secure VPN. This frees up space for multiple assistants’ rooms. Viewings are happening remotely via live video feed or viewing links for repeat viewings, as are voiceovers.

Key staff will be on site for transmission days, maintaining social distancing. If people need to be in the same room, Perspex screens are in place across all the edit suites.

“As we collectively steer our way through the Covid-19 pandemic, entertainment shows such as Strictly are more important than ever, offering audiences a big dose of normality, fun and high energy content,” said Meryl McLaren, commercial manager, BBC Studioworks.

“Making the Strictly ballroom a Covid-secure environment has been a real collaborative effort between BBC Studioworks and BBC Studios, with months of planning and preparation. Now we just can’t wait to let the dancing begin and for it to hit our screens”.

A six-week shoot begins this week on The Cleaner, starring Greg Davies. The project comes from Studio Hamburg UK and is a remake of the German comedy Der Tatortreiniger (Crime Scene Cleaner).

The second series of Hulu’s historical satire The Great has begun filming in London.