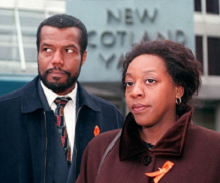 ITV has commissioned Stephen, a three-part sequel to the single drama, The Murder of Stephen Lawrence (pictured).

Stephen is written by Frank and Joe Cottrell Boyce and will be produced by Madonna Baptiste for HTM (Hat Trick Mercurio). Alrick Riley directs.


The production team is making the three-part drama with the support of Doreen and Neville Lawrence.

Stephen will depict events from 2006, thirteen years after Stephen Lawrence died in a racially motivated attack in Eltham in April 1993.

Even though the Lawrences knew the identity of their son’s killers, the original investigation had failed to convict those responsible, and their campaign for justice led to a public inquiry which branded Metropolitan Police institutionally racist and brought about sweeping changes in the law and police practices while highlighting and changing attitudes to racial equality.

However, six years on from the Inquiry no progress had been made into the case. The drama tells the story of the ongoing struggle by Doreen and Neville Lawrence to achieve justice and how a detective, DCI Clive Driscoll – working closely with the Lawrences – put together an investigation that – more than 18 years after his death – secured the convictions of two of the gang who committed the murder of Stephen.

Baroness Doreen Lawrence said: “I am pleased that The Murder of Stephen Lawrence is being broadcast again. Though the events portrayed in the film took place many years ago they are even more relevant today.

“I am aware that the experience of police racism that we suffered as a family has been the experience of many in the UK. I hope that the film and the drama which has been commissioned will provide some insight into what we went through and give some hope to others that justice can eventually prevail.”

Neville Lawrence commented: “I welcome the announcement of this new TV series by ITV, made with members of the same team who wrote and produced the 1999 original drama. That first film was important in telling Stephen’s story. It is important that the next part of the story is told, particularly at a time when, thanks to the Black Lives Matter campaign, concerns around institutional racism are so prominent.


Mark Redhead added: “The Lawrences’ campaign for justice totally transformed attitudes to race and equality in the UK and it’s an honour to be able to help tell what is an untold chapter in their story.  Current events only highlight how relevant and important Stephen’s case remains.”

The Murder of Stephen Lawrence photo via ITV.

C4 orders more of I Am drama anthology

Channel 4 has recommissioned the female-led drama anthology series, I Am, by Dominic Savage.

The tenth series of BBC One’s Death in Paradise has begun filming on the French Caribbean island of Guadeloupe.