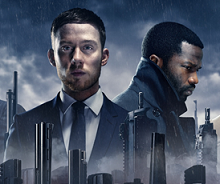 A second series of Sky Original drama Gangs of London has been greenlit, this time with AMC on board as co-producer.

Filming will begin next year on the high-octane series that is produced by Pulse Films in association with Sister Pictures.

Created by Gareth Evans and Matt Flannery, Gangs of London is executive produced by Thomas Benski and Lucas Ochoa for Pulse Films, Jane Featherstone for Sister and Gabriel Silver for Sky Studios.

Zai Bennett, Sky UK’s managing director of content, said: “Not only is Gangs of London Sky’s most binged premiere box-set this year, it’s the biggest original drama launch on Sky Atlantic of the past five years. It’s dark, dangerous and we are thrilled it is coming back for a second series.


"We couldn’t be more pleased to welcome AMC to our gang for Series two alongside the teams at Pulse Films, Sister and Sky Studios.

“Will the Wallace family rise again, will the Dumanis remain loyal to their new allies and who is Elliot really working for? All these questions and more will be waiting for Sky viewers when Gangs of London returns to screens in 2022.”