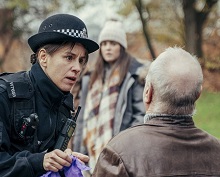 A new BBC One dramatisation of the true events surrounding the 2018 Novichok poisonings in Salisbury filmed at The Bottle Yard Studios and on location in Bristol and the south west.

Production was based at The Bottle Yard Studios in Bristol from October-December 2019, with some location filming in Salisbury itself, Weston-Super-Mare, Clevedon and Malmesbury.

The actual Salisbury park where Sergei and Yulia Skripal were discovered unconscious on a bench after being exposed to the Novichok nerve agent was recreated using Castle Park in Bristol, supported by the Bristol Film Office.

The large-scale filming involved market stalls having to be built along the east side of the park to recreate The Maltings shopping area, which had to be evacuated when the major decontamination operation began.

Several other Bristol locations were used, including Soundwell Centre that was used for the interiors of Salisbury District Hospital and Bristol cathedral which doubled for the inside of Salisbury Cathedral.

The traumatic, real-life content of the drama affected the decision to film some of the series outside Salisbury.

Producer Karen Lewis said: “This is a unique story about Salisbury so we were keen to film there as much as possible. However, we didn't want to remind its residents of the extraordinary, disruptive events they experienced in 2018 by recreating big set pieces there. The drama includes news archive from the time, so our locations needed to be as authentic as possible.

“Bristol has a wealth of modern and period architecture and is very film-friendly. We were hugely supported by the Film Office and The Bottle Yard Studios in finding our key locations and in the filming of this sensitive production.”

Bristol Film Office’s Natalie Moore said: “This was a highly sensitive project that the production team were committed to handling carefully and respectfully. With their main base at The Bottle Yard, it was our role to help source the most suitable Bristol areas to double for Salisbury locations that were central to the telling of this story.

"We were pleased to help the production acquire the space and privacy they needed to re-enact these dramatic events that could not be filmed in Salisbury itself out of respect for local communities.”

The three-part drama comes from Dancing Ledge Productions, and is set to tx over three consecutive nights in mid-June. It is written by Adam Patterson and Declan Lawn and directed by Saul Dibb.