The Northman to film at Belfast Harbour 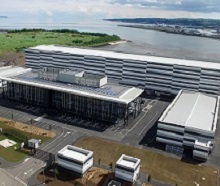 The latest major international project to move into Belfast Harbour Studios is The Northman, directed by Robert Eggers.

The British Film Commission listed the project among several major international titles already in pre-production in the UK this year, consolidating the BFI figures published yesterday that emphasise the massive impact made by inward investment productions on UK production spend – more than £3bn last year.

Eggers will direct The Northman from a screenplay he wrote with Icelandic poet and novelist Sjón.

The Viking revenge saga is set in Iceland at the turn of the 10th century and is laden with a super-starry cast including Nicole Kidman, Alexander Skarsgard, Willem Dafoe, Claes Bang, Anya Taylor-Joy and Bill Skarsgard.

Production Intelligence subscribers have had access to key production information – including shoot dates and HoDs – since on The Northman since November last year; click here to request a free online demo.

Eggers is coming off huge critical acclaim for his psychological horror The Lighthouse, also starring Dafoe alongside Robert Pattinson.

Belfast Harbour Studios opened for business in summer 2017, and has since housed two series of Warner Horizon’s drama Krypton. The eight-acre site currently has two sound stages and is reportedly undergoing expansion plans which will see several more added by next year.