Pennyworth 2 in prep in UK 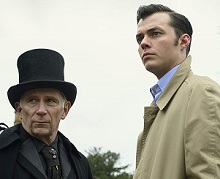 The second series of Pennyworth is now in active pre-production at a UK studio with filming due to begin in early 2020.

The Epix drama is a Batman-related origins story, imagining the early years of the Wayne family butler, Alfred Pennyworth, and comes from Warner Horizon Television and executive producers Bruno Heller and Danny Cannon.

Series One filmed for six months in the UK, and took in various locations around the capital to create 1960s London, including the West End, Senate House and St Pancras station.

Production Intelligence subscribers can log in for more on the second series of Pennyworth, including key UK HoDs and the studio base.