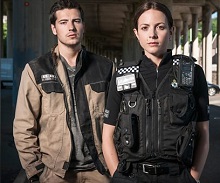 The second series of S4C’s bilingual Welsh drama Bang is gearing up to shoot this autumn.

Set and filmed in Port Talbot, the series is described by Williams as “the story of a brother, a sister and a gun”.

The first run went on to be shown on BBC Wales and won best drama awards from BAFTA Cymru and the Celtic Media Festival.

Unlike bilingual dramas Keeping Faith and Hinterland, which record separate versions in both Welsh and English, Bang uses a blend.

Much of the dialogue is filmed in Welsh, accompanied by English subtitles, to reflect the linguistic mix that is used in day-to-day life in that area of South Wales.

From 12 September, Production Intelligence subscribers can log in for details including shoot dates and the key HoDs on Series 2.

ScreenSkills is running a series of leadership one-to-one surgeries throughout October, as part of its ‘Step Up’ strand, offering training to skill up or move to a new role in unscripted TV.