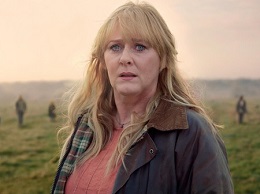 The Forge Entertainment is producing the four-part series that charts the aftermath of a catastrophe in a small Welsh town that claims many lives, including children, and how the community begins to implode as it responds to the tragic event.

Attitudes towards disability are key themes of the story and like Thorne’s previous dramas Kiri (pictured) and National Treasure, The Light (w/t) will also look at the impact of media attention on communities in trauma.

“Jack’s a thrilling writer to work with, not only because of his ability to put his finger on the pulse of what is worrying us as a nation, but because he manages to do so with characters that take our breath away, make us laugh and then leave us wrung dry as we travel with them through the story,” said George Ormond, an executive producer on the drama, when the show was first announced.

“We’re over the moon to be getting the chance to complete the trilogy with The Light (w/t).”

The Forge is in post-production on abuse drama Dark Mon£y and is also currently shooting a third series of school drama Ackley Bridge, set in a Yorkshire academy school.

Grand Chauffeurs was formed in 2003 and over the years has gained a vast experience in providing executive chauffeur driven car hire & transportation for… more Call: 07949 502150   |   Add to Shortlist