The Split 2 readies for production in 2019 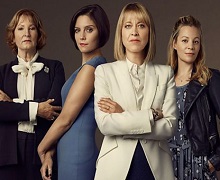 The second series of BBC One’s The Split is gearing up for production in the spring.

The drama comes from Sister Pictures, with the company’s founder Jane Featherstone an executive producer alongside Lucy Richer for the BBC.

Written by Abi Morgan, The Split is set against the backdrop of London’s divorce law circuit. The first series, which was co-produced with Sundance TV, followed the Defoe sisters, most of whom worked for a family law firm.

Morgan said of the recommission: “It’s a delight and a privilege to bring The Split back for Series Two and to submerge myself once more into the world of Noble, Hale and Defoe and the lives of Hannah and her sisters.”

The Split Series 2 is one of several dramas gearing up to shoot in 2019; others include Dracula, Clink and returning series of Ackley Bridge, Harlots and Outlander.