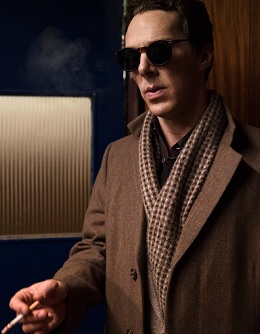 Cumberbatch’s own SunnyMarch banner produced the drama along with Two Cities Television for a story that features the actor and producer as troubled Patrick Melrose in an adaptation of Edward St Aubyn’s novels.

Production was largely based in London, but Glasgow stood in for New York for selected scenes.

The city’s grid system of streets made it a suitable double for US cities and it had previous experience having stood in for the likes of Philadelphia in Brad Pitt’s zombie movie World War Z and for San Francisco in the fantasy movie Cloud Atlas.

“There were several months of prep and extensive meetings with council liaisons to get ready for a five-day shoot,” says Lloret Dunn, supervising location manager on the Glasgow leg of the Patrick Melrose shoot, in comments to The Knowledge.

“Glasgow is a very film-friendly city. Residents get excited when big productions move in and the larger benefits of a high-profile shoot, in terms of film tourism, are well known.

“One of the main things is always to do it in a way that minimises local disruption. We organised a number of street closures over the course of the five days and were even allowed to close Bothwell Street [a key Glasgow artery] for a time, which was great.”

Elements of Patrick Melrose were also filmed in and around a privately-owned chateau in Provence in south-eastern France, where in the story the Melrose family owns a summer retreat.

“The chateau had been used for French TV shows before and had previously been considered by Ridley Scott for his 2006 film A Good Year,” says Xavier Legris, location manager for the French leg of the shoot, in comments to The Knowledge.

“It was suitable for Patrick Melrose as it lies in a quiet region with terraces, vineyards and woods, and has a certain charm. Crucially, it was also close to airports and hotels.”

The production team spent five weeks prepping the French locations. This involved making extensive temporary alterations to the chateau’s interiors to accommodate the changing tastes of the Melrose family in separate time frames of the screen story.