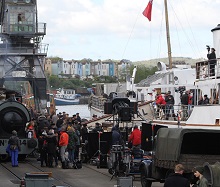 The feature is adapted from the book by Annie Barrows and Mary Ann Shaffer and comes from Blueprint Pictures and Mazur/Kaplan. Mike Newell directs.

The Bristol Film Office assisted the production team for around four months last year. A 1940s dockside was recreated using Princes Wharf (pictured) and the vintage pleasure steamer, Balmoral, with the unit base at Wapping Wharf.

At the time of filming, producer Paula Mazur said: " Due to the period setting, a very specific look was needed to recreate 1940s Guernsey both during and just after the occupation…. Bristol has a fantastic dockside museum, which has been beautifully preserved.

“It has enabled us to transform the exterior to represent Weymouth Docks in 1946. We're grateful for the support of the Bristol Film Office in helping us bring our scenes here to life."

Several other south west locations were used to double for Guernsey including backdrops in Cornwall and Devon, as well as the Charterhouse in London.

Natalie Moore of Bristol Film Office says: “Last year was particularly busy for feature films in Bristol – in addition to Guernsey we also assisted two other major upcoming features to film in the city, Stan & Ollie and Hellboy 3.

“Visiting shoots like these are so important to Bristol. They bring employment and spending that boosts our local economy – to the tune of £18.3 million last year alone.

They show filmmakers in the UK and overseas that Bristol, a UNESCO City of Film, is a world class filming destination that is open for business.”

We are a CNC machining company using the latest CAD/CAM software and 5 axis machines to manufacture sets, props and models for the TV and… more Call: 01634 685319   |   Add to Shortlist