London locations for Ready Player One 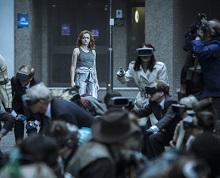 Steven Spielberg based much of the filming for Ready Player One in Birmingham, but also utilised several London locations for the sci-fi action adventure film.

Scenes involving 500 cast and crew were filmed around Ropemaker Street, Moorfields, Finsbury Street and Moor Lane in Islington, near the City.

Citypoint (pictured, on the corner of Ropemaker Street) has hosted several other big shoots  - including Doctor Strange - that need modern office buildings and roads wide enough for stunts.

FilmFixer manages the film office service for Islington and Haringey. Company director Karen Everett said of the production: “The scale of the shoot can’t be overstated. Ready Player One filmed over a day, one weekend in September 2016, with a vast number of extras, wearing the video game goggles we all know feature in the film.

“In the driving stunts around the area, the cars eventually mounted the plaza at CityPoint. Actors with guns jumped out of a van and ran into CityPoint building.

“There was a lot to co-ordinate and police consent was needed for the stunts and use of fake weapons.”

There was also an overnight shoot in Haringey, with around 200 cast and crew using a local music studio and dance studio. Several locals also worked as marshals on the Fontayne Road filming.

Assistant location manager Sarah Kate Lewis said: “On the night, we marshalled the area heavily using a mixture of experienced film marshals, security and locals to make sure that residents could come and go from their houses or from work as needed.”