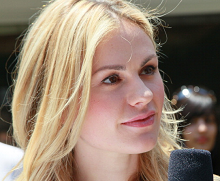 The 6 x 60 is for entertainment channel W and was co-commissioned by UKTV and Pop.

Actor/producer/writer Oliver Lansley has penned the show, which is produced by Mark Talbot. Peter Cattaneo directs the first of two blocks of filming.

Paquin, who is also on the team of executive producers, said of the commission: “Oliver Lansley has written six of the best scripts I've ever read. He walks that fine line between intense character-driven drama and exceptionally intelligent humour.”