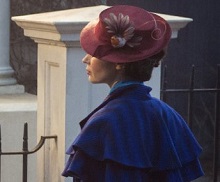 The latest stats from the BFI show that film production spend in the UK over the last six months totalled £982m, with £880m of that coming from inward investment projects.

The report demonstrates the large scale of the budgets of the incoming projects: of the 86 films that started principal photography in the UK in the last six months, 30 were inward investment features.

This means that under half the amount of films that were shot here contributed 90% of the total production spend, with domestic features spending just £84m.

Among the inward investment features which began production in the UK in the last six months are Mary Poppins Returns, Overlord and Mission: Impossible 6.

Of the 86 projects which saw cameras roll, 47 were UK domestic features – such as Peterloo and Stan & Ollie - and nine were co-productions, with the latter spending a combined £17m.

Production on high-end TV was also prolific in the last six months, with a total of 35 projects beginning their shoots and totalling £302m in production spend. Nineteen of these were domestic programmes, spending £141m, and 16 were inward investment or co-production titles, spending £161m.

Brooks Smith Media a drone filming company based in Hertfordshire near Leavesden Studios, Bovingdon Studios and Shepperton Studios. We carry an Open Authorisation from the… more Call: 01442 800900   |   Add to Shortlist