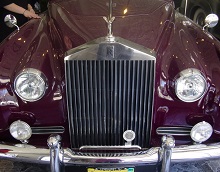 With a screenplay by Jeffery Caine (Exodus: Gods and Kings; The Constant Gardener) and Sharman Macdonald (The Edge of Love), the film is set at the turn of the century and explores the story behind Charles Stewart Rolls and Sir Frederick Henry Royce.

It will also take a look at how an extraordinary love affair played out in the famous Beaulieu family, with one of the parties said to have been the inspiration behind the now iconic emblem of the Rolls Royce, the Spirit of Ecstasy.

The late Sir Richard Attenborough developed the project, which is produced by Martin Scorsese and Anthony Haas of Sikelia Productions and Zuma Productions respectively. Brigitte Hill is the associate producer.

We hope to have more confirmed news on this period drama over the coming months, so make sure you're following the project on Production Intelligence.