Female filmmakers in the spotlight 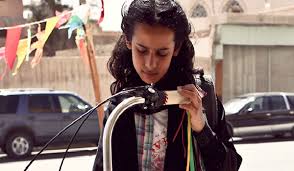 The BFI recently announced that between 2010 and 2012 a high percentage of the most successful and profitable independent British films had a female screenwriter and/or director. Employing more women makes sound business sense, and yet despite this, women continue to be under-represented in the UK film industry and in the wider creative media industries.

In 2009, research by Creative Skillset revealed a drop in the number of women working in the creative media industries, particularly in film and TV. To combat this, a number of initiatives were put in place, such as mentoring schemes, events and training programmes, working closely with partners such as Women in Film and TV and Birds Eye View Film Festival.

Although there is still work to be done, we are now seeing a marked improvement in the representation of women in our industries. Creative Skillset's 2012 Census shows that employment of women in the creative media industries has grown by 16,000 since 2009, with representation rising from 27% to 36%.

In film, women make up 46% of the total workforce (not including freelancers). Inspiring events, such as the WFTV Awards taking place on 6 December are a great way to celebrate the women in our industry and encourage diversity.

We spoke to Tina Gharavi and Muriel d'Ansembourg, two successful female filmmakers who have both benefited from Creative Skillset funding and who have had different experiences working in the industryâ€¦
Â

What are your own experiences of being a woman in the UK film industry? Do you think things are improving?

I don't think being a woman has ever held me back. In many cases it has been an advantage. But then, I don't really think about gender identity as much as I do about other things. I have both had the best of times working with women (and being supported by wonderful women in the industry) and then less support from the 'sisterhood' of colleagues than one would expect.

I don't believe that it is men who hold women back. The industry is full of powerful women but the culture of 'the male genius' persists. However, male or female, we can choose to actively support equality for women or fail to see their value and necessity. If we are going to lecture the Middle East on equality for women, we had better get our house in order.

What is the best advice you've been given as a writer/director?

This is less about something I have been told but more something I have learnt and recently gave as advice to a male filmmaker about the slowness of change: "You are right, the establishment won't give up control easily. And they won't dismantle themselves just by you asking...." I have never said anything more obvious or meaningful.
Â
Â