How to behave at an international film festival 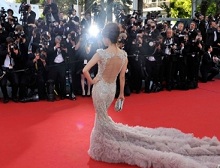 Now the summer break is coming to an end, thoughts turn to high glitz as the international film festival season kicks in once again. With Venice underway,Â Toronto launching on 5 September, Zurich on 26 September and the BFI London Film Festival on 9 October, there is much to consider before heading off to mingle with the stars.

Here we offer some do's and don'ts when preparing to attend a high-profile, celeb-laden event.

DO - Practise your smile and your stance ready to be papped from all angles.

Ladies - the classic and (mostly) flattering 'Oscar pose' which our very own Kate Winslet has down to a tee, is to lead with a forward-jutting right hip, while resting your left hand on your left hip, planted a few inches behind. Turn your head slightly back over your left shoulder, thus dazzlingÂ with your new veneers.Â Learn from Angelina Jolie and do not launch one singular limb out of your gown, as the limb willÂ instantly gather a worldwide following all of its own and overshadow both you and your film.

Gents - you have it a lot easier, just get a well-cut suit, trim those beards and keep this mantra in your head at all times: "What would Clooney do?"

DO - Spend the next two weeks becoming fluent in several languages.

Ambassadors, studio honchos and general grand fromages will be very impressed if you can segue seamlessly from English to French to German all in one elegant linguistic swoop. Â But don't get too carried away - remember, this is not the Eurovision Song Contest and you are not Graham Norton.

DON'T - Keep looking for the next, more interesting/glamorous/famous person to come through the door.Â

You may not be terribly interested in the person who is talking to/at you, but they could be The Next Big Thing. They may be rattling along, barely pausing for breath, plugging away at promoting their new project during a ten minute monologue, but this year's unknown could be next year's Harvey Weinstein.

DON'T - Stick to your 5:2 diet during gala events.

You may have done brilliantly so far and shifted two stone in five days, but festival parties are not the place to adhere religiously to your fasting regime. You will be presented with tray after tray of canapÃ©s and glasses of champagne, and it would be churlish to keep saying no.

And you would be very grumpy, as your colleagues can probably testify.

During a celeb-heavy event riddled with A-list talent, it is not a good idea to be seen urgently trying to get onto Twitter and Facebook while trying to upload your ill-advised snap of the back of Michael Fassbender's head onto Instagram.

You are a fabulous, glamorous ADULT. Spend the time actually enjoying the real, live experience.

Are you heading off to an international film festival? Take a look at our (more serious) guide to networking here.

Tell us your film festival tales via our Facebook page or by leaving your comments below.Â