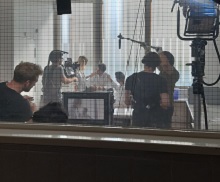 Retention has long been a problem for the film and TV industry, in large part due to long hours of work, the pressure of deadlines and budgets, frequent travel to away-shoots, the difficulty of striking work-life balance and of combining family life with work.

When women reach their mid-thirties and men a bit older, they increasingly drop out of the industry for a better-balanced lifestyle and to pursue other interests.

In a research paper titled, Absent Friends: Scaling the Film and TV Industry’s Retention Problem, the Film and TV Charity estimated that the number of ‘missing’ older workers aged 50+ to be between 24,000 to 35,000. 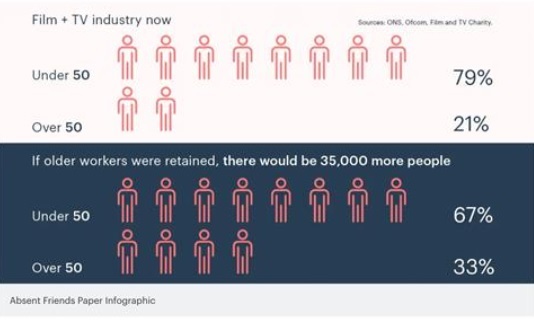 Compared to the total UK workforce, the film and TV industries have an age-skew towards the young and away from the middle aged and older. A higher proportion of film and TV workers are aged under 40 than in the wider UK workforce. From ages 40-50 the percentages are about the same.

But the proportion of film and TV workers aged 50+ is considerably lower than the UK workforce average. For women, the skew begins younger than men, with women leaving the industry from their mid-thirties onwards.

The charity said that improved retention of experienced workers could help meet the film and television industries’ current labour shortage.

“The older workers who leave are experienced, many with management and leadership skills: these are exactly the sort of people the industry needs and has been finding hard to recruit,” said the report.

A linked problem for the industry is that the loss of older staff may lead to premature promotion of less experienced people, sometimes without the training they need to do the job properly.

“Labour shortages in the film and TV industry are occurring in the context of an overall UK workforce that has shrunk since the beginning of 2020. So, without better retention, it may continue to be difficult to meet the staffing needs of the UK film and TV industry,” said the report.

The research complements the Charity’s other work, which includes its recently published Whole Picture Toolkit for mentally healthy productions.

The Charity said that implementing the approaches described in the Toolkit would aid the retention of older, experienced workers who might otherwise burn out and leave.

The Toolkit comprises a package of mini-guides for all stages of production, with subjects that include creating wellbeing plans and mental health risk assessments, supporting a team’s training needs and debriefing senior leaders.