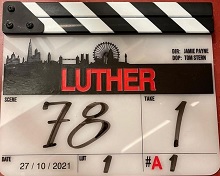 Jamie Payne directs from a screenplay by Luther creator Neil Cross; Tom Stern is DoP. Elba posted the start-of-shooting news on Instagram, confirming that filming had begun with a picture of the clapperboard and the words, “Oi… I’m back!”.

The feature is from Chernin Entertainment, the BBC and Netflix; Andy Serkis and Cynthia Erivo are among the supporting cast.

The original incarnation of the psychological crime drama launched on BBC One in 2010, eventually running to a fifth series that aired in 2019. Elba’s portrayal was much-garlanded, winning him a Critics' Choice Television Award, Golden Globe Award, and Screen Actors Guild Award.

Netflix’s presence in the UK continues to grow – it has a long-term lease on Shepperton Studios and is in production on several big projects at any one time: among the streamer’s productions currently filming are Enola Holmes 2, Bridgerton S2, Lockwood & Co, Half Bad and The Crown S5.

A clutch of other high-profile Netflix titles are now in prep in the UK; PI subscribers can access key information on the shoot dates and HoDs now; non-subscribers can click here to request a free walkaround of the site.