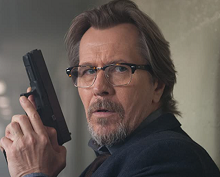 Oldman stars as Jackson Lamb, a brilliant but exiled intelligence officer who ends up in M15's 'dumping ground' department, due to career-ending mistakes.

See-Saw Films is making the drama, which has been adapted as 12 x 60 episodes by Will Smith; it is based on Herron's books Slow Horses and Dead Lions.

Slow Horses was published in 2010, and was the start of a spy series by Herron called Slough House, about M15 agents exiled from the mainstream. Dead Lions was the second in a run of six; it won the Crime  Writers' Association 2013 Gold Dagger award when it was published in 2013.

See-Saw is also busy in prep on another major Apple TV project - period drama The Essex Serpent, production on which has been slightly delayed following Keira Knightley’s departure from the project.

Production Intelligence subscribers have had access to comprehensive listings on these projects for the past few months, including HoDs, studio locations and shoot dates. Click here to request a free live demo of the site.