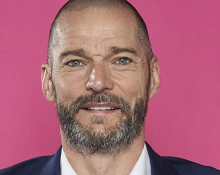 The six-part series will see the new First Dates restaurant in Manchester open its doors to teens aged 16-19, who’ll experience their own blind dates with suitors picked by the research team.

First Dates: Teens (w/t) comes from Twenty Twenty and will air next year on E4, featuring series regulars Fred, Merlin, Cici, Grant alongside some new faces. All dates have been conducted in compliance with strict COVID-19 filming protocols and the most up-to-date government guidelines.

Fred Sirieix (pictured) said: “We’re very excited to be opening the doors of our brand-new restaurant in Manchester to a clientele we've not served before – Teens! We’ll be creating a warm and welcoming space for them to meet new people and hopefully make a connection. Most importantly, we will be looking after them like our own and will provide a space where they can just be themselves without any distractions from the outside world, or their phones! It’s going to be so much fun and I can’t wait to get started!”

First Dates: Teens (WT) has been supported by the government funded Young Audiences Content Fund (YACF), which is managed by the BFI and supports the creation of distinct, high-quality content for children and young audiences.